Ramjets are far more fuel efficient than rockets and can travel much faster��than turbojets. They contain no rotating parts and are mechanically simple. The compressor of a turbojet is replaced by the ramming effect of the engine’s forward motion into the onrushing air���thus the term ramjet engine.

The key to low-cost next generation space travel is an inexpensive air-breathing propulsion system to propel the spacecraft into near orbital conditions. To accomplish this, a wide flight envelope ramjet / scramjet must be further studied and designed.

To build a low cost spacecraft we need the simplest mechanical shapes and actuators to form the variable geometry ramjet. What could be mechanically simpler than a door? Therefore, our variable geometry moving surfaces will resemble doors, i.e. a flat surface moving about a pivot point like a door swinging on a hinge.

In order to fly at the extremely high speeds I am proposing, we must fly at very high altitudes (150,000 feet) where air friction is extremely low. Supporting combustion in such low density altitudes can be problematic. Thus, we must collect large amounts of air and compress it significantly to support combustion. This can be accomplished with a very large air-intake aperture as compared to the combustion chamber’s dimensions. In other words, we may need a very large opening during the highest part of the flight to gulp more air. 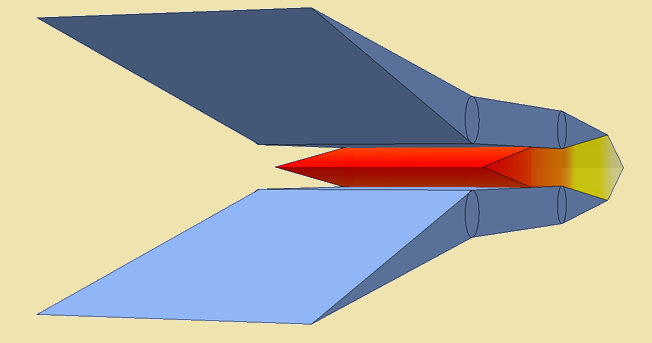 It’s not enough to collect large amounts of air. It is also important to compress this air enough to support combustion. The supersonic shock waves that will form between the air-intakes will compress the onrushing air.

Air passing from one side of the shock wave to the other is compressed. It is reasonable to think of the supersonic shock waves as performing a similar function as the compressor blades inside a turbojet engine.

Similarly, the more shock waves you have, the greater the compression can become, just like multiple stages of compressor blades further compress the air in a turbojet.

The above explanation is an over simplification of the actual number of shock waves that may be created between the two wedges. As a general rule the further the wedges are spread apart, the more shock waves will be created. However, this rule is highly dependent on the altitude and speed of the spacecraft.

Since ramjet technology was mostly abandoned in the 1950s, we have greatly increased our knowledge of hypersonic airflow and computer modeling techniques. We can now simulate and calculate what optimal air-intake angles the wedges will require for maximum efficiency. Further, spacecraft materials have significantly advanced so that these high speed-ramjets can withstand the high-temperatures of such high-speed hypersonic flight. What was impossible complex technology in the 1950s is trivial today.

As compared to rockets, ramjets and scramjets are a practical and dramatically lower cost methodology for the booster phase of a spacecraft.

In the book, “What If We Made Space Travel Practical?” several solutions regarding supersonic and hypersonic ramjets and scramjets are presented.